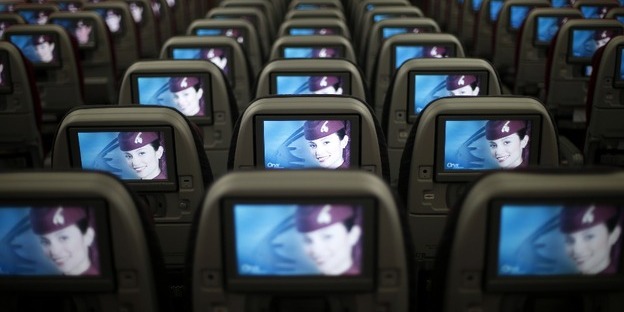 When we last left off, I was stuck on a long layover in Chicago. I thought the worst was behind me. I also thought at one time that Santa was real. Neither of these things was true. You see, I haven’t flown in 30 years. And, surely, in all that time and with all the technological advancements that have shaped and changed how we live, there would be MASSIVE improvements the in comfort and ease of use on airlines.

When the time finally arrived to board my 12 and a half hour flight to Qatar, I was more than ready to get out of the airport. It’s like a black hole in there. I got lost looking for a way to go outside. They are worse than casinos when it comes to not wanting you to leave. I grabbed my backpacks and headed to my gate. Walking through the ramp, I was filled with excitement and opportunities that awaited me!

Then I found my seat. I said, “Wait a minute, I didn’t bring any dolls”. She replied, “What do you mean, sir?” What I mean is that I’m looking at a seat that is obviously only meant for dolls or very little people. I am 220 pounds and I have to sit in what I thought was “Barbies Dream Plane” kit! And I chose the window seat. I am a moron. In all fairness, I only chose the window seat because if the plane was going to crash I could be the first one to give this news to the other passengers. Which is not very nice. Don’t worry, karma kicked in real quick.

Once I oiled up my body enough to squeeze into my miniature dollhouse seat, I slid my carryon under the seat ahead of me. The plane was full and we eventually took off after a 15 minute delay so they could de-ice the wings. Listen, I understand this has to be done for our safety. But this is CHICAGO. In the middle of winter. At minus 2 degrees F. Shouldn’t someone have already thought of de-icing already? THERE’S GOING TO BE ICE!

We took off without issue. The plane ascended, the “fasten seatbelt” sign turned off, and everyone started to settle in for the long journey ahead. Especially the woman in front of me. She immediately reclined her seat as far as it would go for the rest of the flight. As if my “abundant” 3 inches of space was not needed as it was.

I also realized, because, again, I am a moron and picked the window seat, that anytime I needed to stretch or go to the bathroom I would have to get the other two people beside me to get up and let me out. I would become “that guy”. I vowed not to poop.

Without going into detail I’m sure you can figure out how the rest went. I was cramped, leg wise AND bowel wise by the end of the flight. My butt was asleep and that was the only sleep any parts of me got. Once we landed and I stood up, my body sounded like a cereal commercial: SNAP! CRACKLE! POP! But I had a 55 minute layover to stretch, relax, and get some real food. In THEORY, this was true. In reality, it was a straight up, self deceiving lie sent from the dark lords nether orifice.

We had to go through security, of course. Everything had to be taken out of your bags, put in a bin, shoes off, through a metal detector, put everything back in your bags, and onward! This took about 45 minutes. There were too many customers and not nearly enough security personnel.

To make a long story even LONGER, I missed my flight to Bangkok. I was supposed to leave at 5:40. The next flight wasn’t until 8:00. That flight was full. The NEXT flight to BKK wasn’t until the next day. But I was told that if I wanted to pay $3,000, they could get me on the 8:00 flight. Was this a bribe? Maybe. But the gentleman spoke very broken English and I spoke zero of whatever language was his native tongue. But that’s the gist from what he wrote down.

Luckily, as I was regretting not packing a noose so I COULD HANG MYSELF and get it over with, a couple of young ladies came over who also worked with the airline. Their English was great and, after about 5 minutes of typing what I assume were random things on their computer, they assured me I could get the 8:00 flight, for no extra money but my connecting flight from Bangkok to Siem Reap would have to be rearranged there because I probably wouldn’t have time to make it now.

I readily agreed, thanked them profusely, offered them my seed in gratitude (which they most definitely did NOT want any part of) and made my way to sit right at the check in counter for safe measure.

Karma must have found another sucker because that flight went well. And when I arrived in Bangkok, I was met at the ramp getting off the plane by a very nice and super awesome Thai lady who commanded me to follow her! Needless to say, I would have followed her anyway because she was hot, but that’s beside the point. We were fast walking/jogging to security where she got me through fast. We then were walking fast/running to the gate where my plane was almost ready to take off. She had already radioed ahead to have my boarding pass ready. I made it, Thanks to these three lovely women, I arrived on time to Siem Reap.

Yes, getting there is the hardest part of travel. But once you make it you think….was that REALLY so bad now that you’re here? YES! Yes, it was. I am happy to be here though! 🙂

Thanks for reading. Until next time,

View all posts by spleendingo